As I entered the names, I reflected on another ceremony in 1994. My only child, Jennifer, was graduating from Marine Corps boot camp. She was selected as the Honor Graduate for her platoon in recognition of “outstanding leadership, discipline, proficiency, bearing and physical fitness.” She also received the highest score of her platoon on the rifle range.

Jennifer had not discussed entering the Corps with me—she just announced it after she enlisted. I brought her up to be patriotic and independent. I guess I shouldn’t have been surprised.

On October 2, 1995 at 10:30 p.m. two uniformed Marines knocked at my door. There could only be one reason—my beautiful 19-year-old, brown haired, brown eyed daughter was dead. That night changed my life forever.

I could describe in my own words what that did to my life, but I’m going to borrow someone else’s words who said it best:

The death of a child … kills the future and decimates the past, making the former an imprisonment that seems interminable … the latter an unvoiced reproach for every moment robbed of its significance by the calls of a parent’s career.  One didn’t recover from such a death.  One just grew more adept at stumbling on.”  Unknown.

And so, I stumbled onto and into the BTVC and signed up to volunteer two days per week.  As Tim FitzGerald, the Director of the Center observed my various and sundry skills, he asked me if I would be his Administrative Assistant.  I was honored and told him I would be there five days a week.

I used to be a sales and management trainer for Ford Motor Company.  In fact, I was the on-camera presenter for their first satellite broadcast.  When I did field training, I would always begin by asking if there were any Veterans in my class.  They would raise their hand and I would thank them for their service. This was long before my daughter enlisted.  My father served in WWII as a medic.  I can’t even begin to imagine what he dealt with.

So, I volunteer at the Vet’s Center for Jennifer and for my father.  I have so much respect for our Vets and I would do anything to help them.

Jennifer’s picture sits on the bookcase next to her cover (hat) at the Center.  In many ways she is there with us as we move through our very busy days assisting Veterans with their needs; and I have,once again, found a purpose for my life. 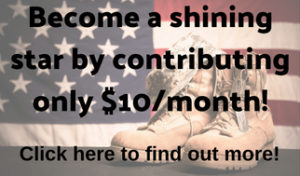 There are also those who weren’t born in this country who have noticed the American dream and have become citizens. They have raised families, had careers, and enjoyed the success that hard work and determination will bring in this country. END_OF_DOCUMENT_TOKEN_TO_BE_REPLACED

Disclaimer: For informational purposes only. We cannot guarantee the validity of any of these websites or services. END_OF_DOCUMENT_TOKEN_TO_BE_REPLACED